The types of cured spanish ham

There are basically two different types of cured hams in Spain, jamón serrano or “mountain ham,” and jamón ibérico or “Iberian ham.”

Jamón Serrano - There are almost 2,000 producers of Serrano ham in Spain. Eighteen of these producers formed the Consorcio de Jamón Serrano Español in 1990. The name Jamón Serrano is now controlled by the European Union since the year 2000 and it protects the processing of this product, although it does not apply to a specific region. Look for the label that has an “S” in the shape of a ham, and says SERRANO ESPAÑOL if you want to buy Jamón Serrano from the consortium. The mountain or Serrano ham is made from several different breeds of white pigs, such as Duroc, Landrace or Large White. They are fed mainly cereals and cured from 7 to 16 months. 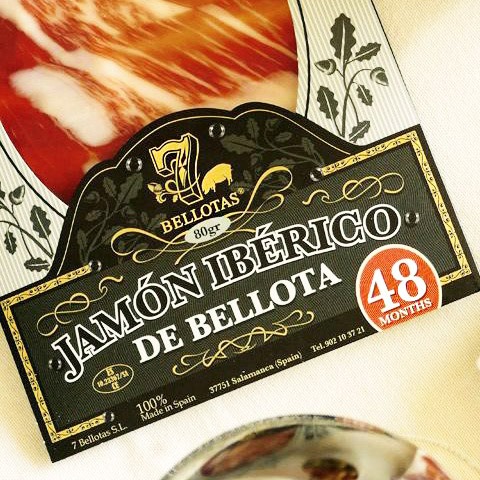 Jamón Ibérico – This ham is made only from the Iberian pig. The breeding of the Iberian pig is restricted to an area in Southwestern Spain and Southeastern Portugal. Although fed some cereals, these pigs also roam countryside and feed on acorns. The curing process lasts from 14 to 36 months.

how to identify the quality of the spanish ham

As everyone knows that spanish hams have lots of different types: Iberian ham, serrano ham, iberian acorns ham, and so on. so how to identify the hams’ quality is the question that people always ask for.

Even through the products are different, but the ways to identify are absolutely same. here are 2 most useful methods: the flavor and the grain of spanish ham. the flavor of spanish hams before you taste the ham, you’ll smelling its fragrance. once you eat it, the taste will stay in your mouth long time. also if it’s a great spanish ham, it has the grain that likes marble.

once you saw the ham have these 2 ways, it is a great spanish ham for sure. because only the best spanish ham has both of them.